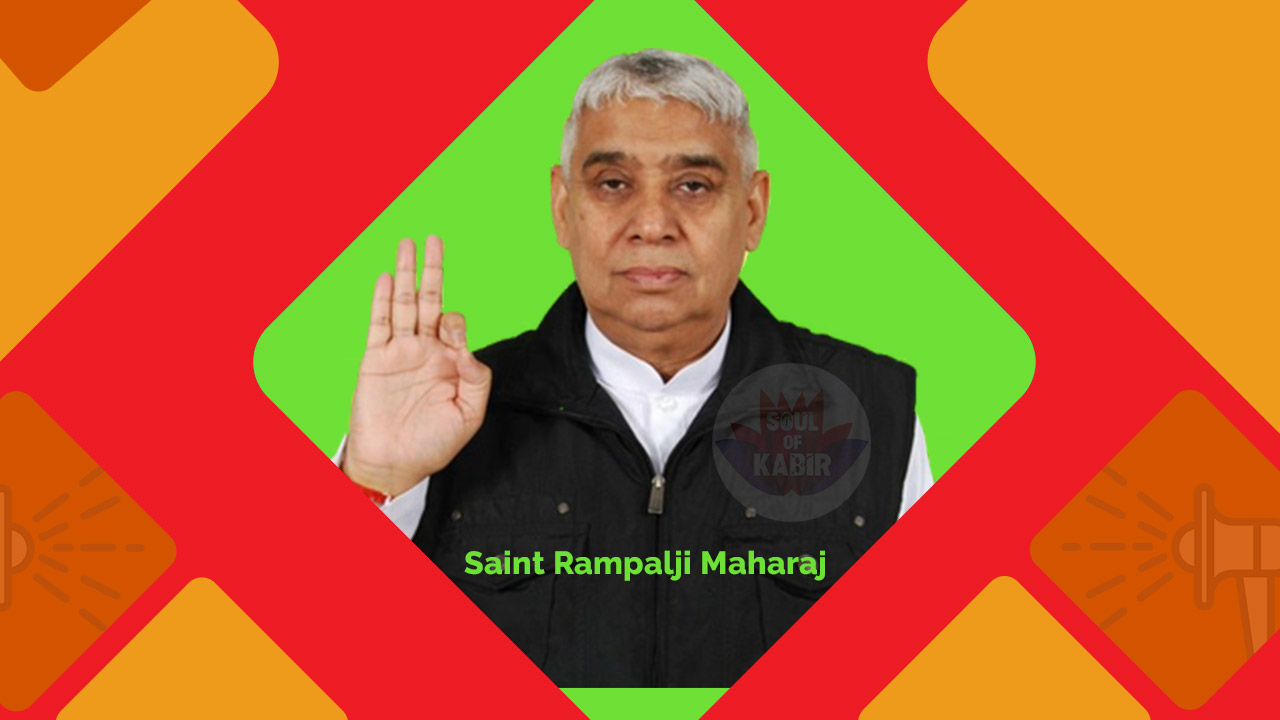 Saint Rampal Ji Maharaj an incarnation of Lord Kabir Saheb, born on 8th September 1951 in Village called Dhanana, Tehsil Gohana, District Sonipat (Haryana) state in a middle class family. His parent’s are Bhakt Nandram and Bhaktmati Indradevi. After completion of diploma in Engineering Saint Rampalji Maharaj was appointed as a J.E. in the irrigation sector of Haryana Government, India.

Everyone has their own nature and Saint Rampalji’s was keen towards spiritual facts . As a devotee of Lord Hanuman ji, he worshiped about 25 years reciting Hanuman Chalisa 7 times a day. He visited famous temple of Hanuman Ji in a village Salahsar in district Churu in Rajasthan to do worship for eighteen years.

Along with this, Saint also used to worship Shri Krishna Ji who is in form of Lord Vishnu. Khatu Shyam ji was another idol for saint and used to consider with same respect. Saint used to meditate for several hours. But main concern is doing such pious activities saint neither attained mental peace.  There was strong desire to meet with true god for this saint used to meet sadhus but all was in vain.

Not only this I also perform “Shraadhs” and celebrate all the festivals as the ancestors  were following. Then, Swami Ramdewanand Ji told these practices are neither for mental relax nor attaining the God. Swami proved by sacred speech of Kabir Sahib that:-

Swami Ji briefed that these practices are false spread by Kaal Niranjan (Brahm). With these none can attain mental peace and God. Because these practices are not true way of attaining Purna Parmatma ( Complete God). God Kaal Niranjan is the owner of 21 Brahmands (Universe) and also known as Jyoti Niranjan, the formless in other word (Brahm) in the pious book Vedas. His better half Durga ( Astanghi, Prakriti, Sherawali, Maya) and their three sons are Brahman, Vishnu and Shiv. By their Yogmaya (Shakti) these five have mis-guided and misled the human livings creating the illusion and kept far from Supreme God, Satpurush (Purna Brahm).

As a result human worshipped their false knowledge and are forced to go in the birth cycle of 84-lakhs species of life.  And Satguru Garivdas Ji Maharaj says in his words that:-

By worshipping by this true mantra of SatPurush one attains mental health and complete salvation as well. After this human souls will never have rebirth again. When Saint Rampalji Maharaj heard the true words of Swami Ji, Saint was in dilemma because that words were never heard before. As the statement of Swami Ramdewanand ji are true, Saint accepted and took initiation (Naam Upadesh) from Swami Ji on 17th February 1988.

When Swami Ji were 16 years of old while grazing the domestic animals outside the village near to wood. He met Kabir Panthi Mahatma and Mahatma inspired Swami  ji to do bhakti by true ways from Holy scripts. Swami ji was highly motivated and to get rid from 84-lakhs rebirth, immediately took off his clothes and threw them in the wood. Swami ji wore other cloths and went away with that Kabir Panthi’s Mahatma.

Swami Ji’s members found the cloths in the wood and had though that Swami Ji became the prey of wild animals. From that day Swami Ji never returned his home.

He was considered as dead and family started carrying out his Shraadhs. 70 Shraadhs were carried out by his sister-in-law (Bhabhi) as she illustrated by herself. After this incident Saint’s destiny was transformed and thought that this practice of carrying out Shraadhs and worshiping statues/idols is all useless and pay no benefits.

The day once Saint had visited his relatives. There was a dog standing nearby while having food, Saint gave tortillas to the dog. Instead of eating the tortillas the dog took it and buried it in nearby heap of dirt.

All these activities were precisely examined by the Saint. Next day while having tea, the dog took out the tortillas which he had buried. It became dry and hard but hat dog started eating it.

Again all these activities of poor dog was examined by the Saint and shares the events to the relatives. Saint got, dog never eat tortillas on Tuesday and yesterday was Tuesday replied from the relatives.

After inspecting all these, Saint thought this dog must have fasted numerous time when in human life as reflection he still remembers the fasting. But that fasting benefits nothing in result got 84-lakhs life forms and this life is now a dog.

Saint began to do sumiran (mental-recitation) of the ‘Naam’ provided by Swami Ji  to figure out the truth, and simultaneously began to study all the holy scriptures from the core to inspect more about the life and journey started.

Saint studied ‘Sat Granth Saheb; ,created by Saint GaribDas Ji Maharaj, Shree Mad’Bhagwat Gita, Kabir Sagarall the purans and the sacred speeches of all other saints as well. The evidence was also present in Purans and Gita Ji whatever Swami Ramdewanand Ji had told him and that lessons are true.

Three son Brahma, Vishnu and Shiv are blessed with three different Gunas ( Rajgun- Brahma, Satgun- Vishnu and Tamgun as Shiv) chains the soul to a body. More it is scripted about Purna Brahm (Complete God) in Adhaya no. 3, Shlok no. 14-15 that all the living beings evolved from food grains, food grains from rain, rain from Yagya (Sacred Ceremony), Yagya from auspicious actions, actions have been forced by Brahm (Kaal Niranjan) and Brahm has arised from Complete God.

Even the results of Yagya are obtained from Param Aksjar Purush ( Complete God) only. It is also scripted that the mother of three Gods (Brahma, Vishnu and Shiv as Rajgun, Satgun and Tamogun) is Adi Maya Prakriti/Durga in DeviBhagwad Mahapuran and Kaal Niranjan also called Jyoti NIranjan is their father. This nature is flowed by them only.

It is also scripted that three Gods (Trinity) were born from sexual intercourse of Maha Shiv and Shiva (Durga)  in ShivPurans 6th Adhaya. Here Shiva is (Durga/Adi Maya) and Maha Shiv is Kaal Niranjan. The real form of Vishnu is Kaal scripted in Vishnu Puran as well. Joti Niranjan speaker of Gita ji, himself saying that he is Kaal in Adhaya no. 11, Shlok no. 32.

Saint Rampalji Maharaj did extreme jaap of “Naam” provided from Swami Ji and the jaap is “Satnaam” and “Saarnam”. As a result Purna Brahm Kabir Sahib met Saint and told the truth.

Saint Rampalji Maharaj is blessed and permitted to give Naam-Daan (Initiation) from Swami Ramdewanand Ji Maharaj in 1994. After the permit Saint started explaining the true way of worship from where supreme God can be met and salvation is possible by visiting the various villages and cities.

While spreading the true knowledge Saint left the job as Saint don’t have enough time to pay attention to the job. Saint worked for 18 years. Several human got happiness and mental balance and enlightened the spiritual knowledge by taking Naam-Daan. Hence population of Naam Daani started increasing globally.

Several people came to Saint requesting to eradicate the sorrow but Saint explained them neither Saint uses any Jantra-Mantra nor Jhaada (practice of snatching out the evil spirit by means of charms).  Saint only give initiations (Mantra) of God Kabir’s.

Some people said the they never have attained any kind of happiness and satisfactions though they are followers of huge saint who has lakhs of people following though they sit in meditations for more then hours. On this Saint Rampal Ji Maharaj explained the power of “Satnaam” and those who recites “Satnaam” attains peace and their suffering will be vanished. Kabir Sahib says that:-

The people were given wrong Naam Upadesh (mantra) which don’t have any indications or evident in any saints scriptures. Saints gave them wrong naam upadesh. Satnaam is only true naam and its proof can be seen in God Kabir’s, Saint Dharamdas ji, Saint Ghisa Ji, Saint garibdas Ji, Guru Nanak Ji, Saint Dadu Ji saint’s speeches which is performed with Concentrations and Attentions (Surati-Nirati), Maan (Mind)and Pawan (Breath) in second language its also called Ajappa jaap.

This mantra is performed with the repetitions of breath. Saint Rampalji revealed that Master of all god is one and salvation is only possible through that Master.

With the Satnaam several people got the happiness and mental satisfaction which is powerful Naam. With this naam (mantra) one sees god in form and sufferings are vanished away. If one wants to get salvation and escape out from this Kaal’s worlds then he/she must took initiations from Sant Rampalji Maharaj. There is no any other way to get salvation and its only possible through true knowledge from true guru Saint Rampalji Maharaj.

Even mother Parvati God mahesh’s wife living with him for 108 births never attains salvation and get freed from cycle of birth-death. The day when she met Sage Narad Muni, Muni said that mother you repeatedly have birth and death, why don’t you make God Shiv as your Guru and request him to get rid of the rebirth cycle.

On this words mother Parvati got inspired for bhakti. On the result mother Parvati asked God Shiv to get the way for salvation and made him her Guru. God shiv took Parvati to secret place and told her to sit in aasan padam (right foot placed over left thigh and left foot over right thigh and both hands placed on knees a kind of sitting posture) and keep the backbone straight and secure your Bhanwar (mind) in the vacuum zone.

Shiv told her the way to go to Kamals like Mool Kamal, Swaad Kamal, Naabhi Kamal, Hridya Kamal, Kanth Kamal, Trikuti Kamal and Sahnsrar Kamal. After this way mother Parvati achieved the equal life to God Shiv. All the lok will get destroyed, When Jyoti  Niranjan (Brahm) will cause the huge destruction (mahapralayno any lok remain, nor gods because all these have not achieved salvation. They are also transitory.

Saint Rampalji Maharaj have lakhs of disciples from different state of the country like Uttar Pradesh, Rajasthan, Maharastra, Punjab, West Bengal, Haryana, Delhi and other states as well.

People got shocking benefits like their bad habits of consuming tobacco, marijuana, smoking, alcohol, non-veg consumption are miles away. Satnaam given by God Kabir is very powerful naam and they attains great spiritual experiences and extreme pleasure while doing the jaap of it.

Several people got their prosperous  life from ruined families and get cured from fatal diseases and illness as well. One should take initiations from Sant Rampalji Maharaj to achieve benefits and salvation as well.

To take Naam Upadesh please click here and met the complete god as per the holy scripts. For more please visit here.